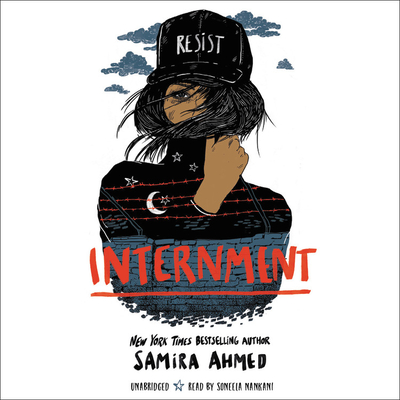 With searing clarity, Internment paints an alternate near-future where frenzied hatred and fascist bigotry take hold of America and drive all Muslim Americans into internment camps, just as Japanese Americans were during World War II. As we watch Layla, our protagonist, fight and scrounge for justice, for safety for her family and friends, and freedom for her community, we are inevitably called into the resistance alongside her. This is a thrilling read - it is a terrifying reminder of what is possible and a tremendous call to action. You won't be able to put it down.  - Kylie

“The Hate U Give meets The Handmaid’s Tale in this slightly futuristic and dystopian version of America in which Muslim Americans are placed in internment camps. Ahmed’s book starts out with Layla describing how the real-life statements and policies of Trump’s America led from our current world to the horror of the book. Internment shines in showing not only Layla and her friends’ resistance, but also the life and humor the characters exude, even during their darkest days. A revelation that deserves as much recognition and praise as Angie Thomas’ debut work.”
— Christine Stamper, Bookbug, Kalamazoo, MI

Rebellions are built on hope.Set in a horrifying near-future United States, seventeen-year-old Layla Amin and her parents are forced into an internment camp for Muslim American citizens.With the help of newly made friends also trapped within the internment camp, her boyfriend on the outside, and an unexpected alliance, Layla begins a journey to fight for freedom, leading a revolution against the internment camp's Director and his guards.Heart-racing and emotional, Internment challenges readers to fight complicit silence that exists in our society today.