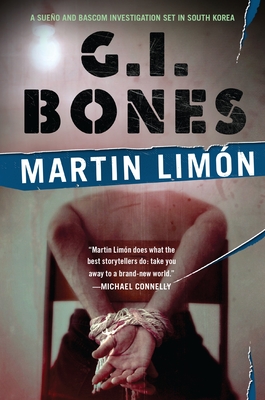 This is book number 6 in the A Sergeants Sueño and Bascom Novel series.

A Korean fortune-teller is haunted by a long-dead American soldier who wants his bones found and buried. A Latino soldier and the underage daughter of a white American officer are missing. Several notorious Korean gangsters who own bars in Itaewon—Seoul’s red light district—have been killed. American military police officers George Sueño and Ernie Bascom must dig deep into the bloody history of Itaewon in order to find out who killed the dead soldier, who’s taking revenge on the gang lords, and where to find the missing girl.

Martin Limón retired from military service after twenty years in the US Army, including ten years in Korea. He is the author of ten novels in the Sueño and Bascom series, including Jade Lady Burning, The Iron Sickle, The Ville Rat, and Ping-Pong Heart, as well as the short story collection Nightmare Range. He lives near Seattle.

An NPR Best Book of the Year

"The latest in the series, G.I. Bones, is brilliant—imbued with affecting characters, a morally knotty storyline, and a last chapter that just plain stuns."
—Maureen Corrigan, NPR.org

“Nobody navigates the barely controlled chaos of Seoul’s red light district like these two—or the byzantine ways of Army bureaucracy, for that matter. Limón’s empathy for Korean culture, meanwhile, makes him an excellent guide.”
—The Seattle Times

“If you’ve never encountered Limón in your literary travels, [G.I. Bones] is a good place to begin your journey.”
—Milwaukee Journal Sentinel

Praise for the George Sueño and Ernie Bascom series

“Combining the grim routine of a modern police procedural with the cliff-hanging action of a thriller movie.”
—The Wall Street Journal

“It’s great to have these two mavericks back.”
—The New York Times Book Review

“Setting the standard for military crime fiction, Limón’s compelling stories of murder, greed, and abuse of power are set off by the Korean culture and 1970s atmosphere.”
—Library Journal, Starred Review

"Throughout this critically acclaimed series, Limón has displayed a remarkable talent for weaving his background knowledge of the country into his plots."
—Booklist

“Martin Limón does what the best storytellers do: take you away to a brand new world.”
—Michael Connelly