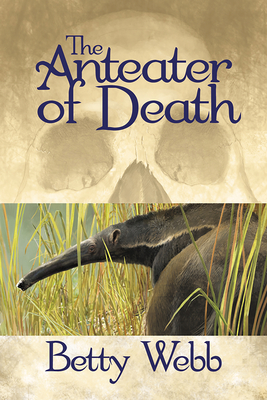 2009 Winner of the Arizona Book Award for Mystery/Suspense

If Lucy, the pregnant Giant Anteater from Belize, didn't kill the man found dead in her enclosure at California's Gunn Zoo, who did? Zookeeper Teddy Bentley must find the real murderer before her furry friend is shipped off to another zoo in disgrace.

Then another human bites the dust, the monkeys riot, and the wolves go nuts. Things get worse when the snooty folks at Gunn Landing Harbor attempt to evict Teddy from the Merilee, her beloved houseboat.

That's just the beginning. Her father, on the lam from the Feds for embezzling millions, gets targeted by a local gangster; and Caro, Teddy's socialite and former beauty queen mother, who loathes Teddy's dangerous job, starts introducing her to eligible bachelors. Then Teddy herself becomes a target for murder.

Betty Webb, author of the popular Lena Jones mystery series, has been a journalist and book reviewer for the past 20 years. As a reporter, she has interviewed U.S. presidents, Nobel Prize winners, astronauts who walked on the moon, the homeless, and polygamy runaways. Her Lena Jones detective series--"Desert Run," "Desert Shadows," "Desert Wives," "Desert Noir," and "Desert Cut" --has garnered rave reviews from the "New York Times," "Chicago Tribune," and other prestigious national publications.Webb's work has also been collected in several anthologies and magazines. "The Anteater of Death" is first in her new Gunn Zoo Mystery series. Betty teaches creative writing at Phoenix (Arizona) College. www.bettywebb-zoomystery.com

"Webb, author of Desert Cut and four other Lena Jones mysteries, launches a new series featuring a warm and unconventional heroine, zookeeper Theodora 'Teddy' Bentley. Teddy is dismayed to learn that a pregnant anteater in her care, Lucy, appears to have mauled to death a prominent patron of California's Gunn Landing Zoo, Grayson Harrill. When it turns out that someone shot Harrill first, Teddy turns sleuth to discover who framed her beloved Lucy. The colorful supporting cast includes Teddy's beauty queen mother, who makes her daughter call her Caro; Harrill's wife and descendant of the zoo's founder; and the zoo's controversial director. Webb deftly weaves zoological lore into the fast-moving plot... The book's human perspective conveys everything we need to know about Lucy, her habitat and her behavior." -- Publishers Weekly

"Webb (Desert Cut, 2008, etc.) kicks off her new series with a bright heroine and an appealingly offbeat setting: a firm foundation later episodes can build on."  -- Kirkus Reviews

"Webb, author of the well-written Lena Jones PI series, not only presents a clear picture of what it is like to work in a zoo but also introduces an engaging new protagonist who will appeal to mystery buffs who enjoy light animal mysteries." -- Library Journal