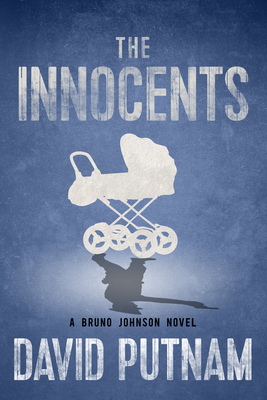 This is book number 5 in the A Bruno Johnson Thriller series.

Booklist sums up Putnam's Bruno Johnson series: "Bruno Johnson believes so passionately in justice that he'll lie, cheat, and steal to achieve it—and he'll pulverize anybody who gets in his way."

The Early Years: Book One

Bruno Johnson, a newly minted LA County Sheriff Violent Crimes detective, gets the worst assignment possible—infiltrate a sheriff's narcotics team that may be involved in murder for hire. Gain their trust and be brought into the scheme. If he succeeds, he will have to arrest and testify against his fellow deputies—if he lives that long.

To make matters worse, before Bruno leaves home on the first day of this assignment, he answers the door to find an ex-girlfriend. Without explanation, she hands him a baby girl only weeks old. The child is his. Stunned and terrified, he now faces immediate fatherhood as well as the traitor-like charge to take down his colleagues.

Juggling his complex home life, Bruno tackles his assignment to discover that no one is who they seem to be and that his boss, Lieutenant Wicks, might be involved. His mission is further complicated when an attractive female deputy, recently transferred from Public Affairs, is also put on the case. She has no street experience, and Bruno carries the extra burden of watching her back—a tough assignment made tougher by personal attraction.

As Bruno gets deeper and deeper into the corruption, he doesn't know whom to trust, and in the end, confides in the wrong person.

Best-selling author David Putnam comes from a family of law enforcement and always wanted to be a cop. During his career, he did it all: worked in narcotics, served on FBI-sponsored violent crimes teams, and was cross-sworn as a US Marshall, pursuing murder suspects and bank robbers in Arizona, Nevada, and California. Putnam did three tours on the San Bernardino County Sheriff's SWAT team, executing dynamic entries, hostage rescues, and serving as team sniper. He has also worked in criminal intelligence and internal affairs and has supervised corrections, patrol, and a detective bureau. In Hawaii, Putnam worked as Special Agent for the Attorney General investigating smuggling and white-collar crimes.

"The Innocents is a terrific read reminiscent of the best of Joseph Wambaugh. David Putnam provides an insider's knowledge of the Los Angeles Sheriff's Department. His characters and settings are rich and authentic, and his dialogue is spot on accurate. A great novel for lovers of the mystery genre that blurs the line between good and evil and will keep you guessing until the final pages." — Robert Dugoni, New York Times best-selling author

"Putnam has again come up with a winning combination, a page-turning story and Bruno Johnson, his everyman hero intent on doing the right thing no matter what. Bruno is the guy you want on your side when the chips are down. Do yourself a favor: read this book." — Harry Hunsicker, Shamus and Thriller Award nominee

"The Innocents tells a story so fast and so taut it never touches the ground, and the people stay with you long after you put it down. David Putnam is one of the few writers who can bear comparison to Joseph Wambaugh." — Timothy Hallinan, Edgar, Shamus, Macavity, and Lefty Award nominee

“Putnam’s knack for creating powerfully cathartic action scenes provides just what we need after spending time in a world that’s like a ‘40s movie, where everybody’s a rat fink. Except Bruno Johnson.” — Booklist

"In a dry, Dragnet-style 'just the facts, ma'am' manner, this prequel to the Bruno Johnson series keeps readers engrossed with plenty of energy and surprises." — Library Journal

"With his clipped prose, authentic dialogue, and the brutal reality of his plots, David Putnam's Bruno Johnson series is [an] exceptional one to follow. The Innocents... hums with moral contradictions, terrible choices and a lot of testosterone." — Milwaukee Journal Sentinel

“Another riveting novel by an author with a genuine flair for narrative driven fiction.” — Midwest Book Review

“With enough drama to start a crime show, The Innocents is a fun, quick read with a little peek into the world of Bruno Johnson. David Putnam’s real feel take on the life of a deputy flow and moves like silk across the page.” — Killer Nashville

“A fast-paced, thrilling adventure… The Innocents is a wonderful roller-coaster ride, full of twists and turns on every pages that will keep readers holding their breaths to the very end!” — InD’Tale Magazine