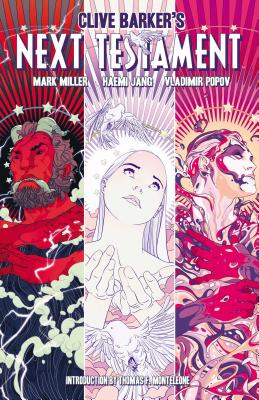 This is book number 2 in the Next Testament series.

The last chapter of Clive Barker's Next Testament The otherworldly being known as Wick has conquered the planet -- after multiple displays of force that have severely damaged the world's travel and telecommunications systems, he rules the world unopposed, with an increasingly large group of disciples following his every move. But not every one is as enamored with Earth's new Lord -- the young lovers Tristan & Elspeth continue their cross-country quest for answers, and as they reach the East Coast, they may just find the allies they seek. The Harvey-Nominated epic comes to its thrilling conclusion, as Master of Horror Clive Barker joins forces with co-writer Mark Alan Miller (HELLRAISER) and artist Haemi Jang (HELLRAISER: THE ROAD BELOW) wrap one of the most popular horror comics of recent memory.

Clive Barker is the worldwide bestselling author of the Books of Blood, and numerous novels including Imajica, The Great and Secret Show, Sacrament and Galilee. In addition to his work as a novelist and short story writer he also illustrates, writes, directs and produces for the stage and screen. His films include Hellraiser, Hellbound, Nightbreed and Candyman. His comic book work includes creating the Razorline imprint at Marvel Comics and the 3-D comic book Seduth with IDW Publishing.