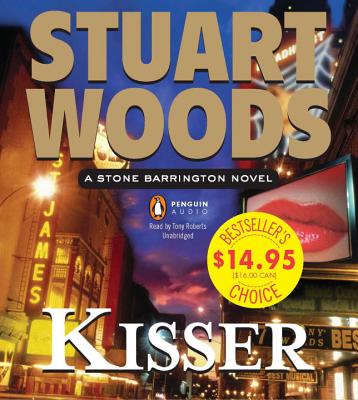 By Stuart Woods, Tony Roberts (Read by)
Unavailable to Order
Hard to Find

This is book number 17 in the A Stone Barrington Novel series.

A fetching Broadway actress has a pout to die for, a past to hide from- and Stone Barrington on her case...

Stuart Woods was born in the small town of Manchester, Georgia. He graduated from the University of Georgia with a B.A. in sociology and moved to Atlanta, where he enlisted in the Air National Guard. In the fall of 1960, Woods moved to New York in search of a career in writing, and remained there for a decade working in advertising, with the exception of ten months spent in Mannheim, Germany with the National Guard during the Berlin Wall crisis of 1961-62.

An attack of wanderlust drew Woods to London, where he worked in advertising agencies until the idea of writing a novel called him to a small flat in the stableyard of a castle in County Galway, Ireland. There, Woods completed one hundred pages of a novel before he discovered sailing, after which, “everything went to hell. All I did was sail.”

Woods took his sailing to a higher level, competing in the Observer Singlehanded Transatlantic Race (OSTAR) in 1976, and the catastrophic Fastnet Race in 1979 in which fifteen competitors died. In October and November of that year, Woods sailed his friend’s yacht across the Atlantic, calling at the ports of Azores, Madeira and the Canary Islands, before finishing at Antigua in the Caribbean.

The next couple of years were spent in Georgia, where Woods wrote two non-fiction books: Blue Water, Green Skipper, an account of his Irish experience and the subsequent transatlantic race; and a travel guide entitled A Romantic Guide to the Country Inns of Britain and Ireland, which Woods says he wrote “on a whim.” W.W. Norton in New York bought the rights to Blue Water, Green Skipper, and published Woods’ first novel, Chiefs, in 1981. Chiefs won the Edgar Award from the Mystery Writers of America that year, was nominated for Palindrome, and was made into a six-hour television drama starring Charlton Heston for CBS. In 2006, Woods had two New York Times national bestsellers with Dark Harbor and Short Straw, and repeated the feat in 2007 with Fresh Disasters and Shoot Him If He Runs.