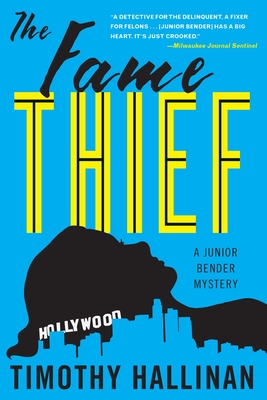 This is book number 3 in the A Junior Bender Mystery series.

There are not many people brave enough to say no to Irwin Dressler, Hollywood’s infamous mob boss-turned-movie king. Even though Dressler is ninety-three years old, Junior Bender is quaking in his boots when Dressler’s henchmen haul him in for a meeting. Dressler wants Junior to solve a “crime” he believes was committed more than seventy years ago, when an old friend of his, once-famous starlet Dolores La Marr, had her career destroyed after compromising photos were taken of her at a Las Vegas party. Dressler wants justice for Dolores and the shining career she never had.

Junior can’t help but think the whole thing is a little crazy. After all, it’s been sixty years. Even if someone did set up Dolores for a fall from grace back then, they’re probably long dead. But he can’t say no to Irwin Dressler (no one can, really). So he starts digging. And what he finds is that some vendettas never die—they only get more dangerous.

Timothy Hallinan has been nominated for the Edgar, Nero, Shamus, and Macavity awards. He is the author of twenty widely praised books, including The Fear Artist, For the Dead, The Hot Countries, Fools’ River, Crashed, Little Elvises, Herbie’s Game (which won the Lefty Award for Best Humorous Mystery), King Maybe, and Fields Where They Lay. After years of working in the television and music industries, he now writes full-time. He has homes in California and Thailand.

Praise for the Junior Bender Series

"If Carl Hiaasen and Donald Westlake had a literary love child, he would be Timothy Hallinan.  The Edgar nominee's laugh-out-loud new crime series featuring Hollywood burglar-turned-private eye Junior Bender has breakout written all over it... A must-read."
—Julia Spencer-Fleming, New York Times bestselling author of One Was a Soldier

"Junior Bender is today’s Los Angeles as Raymond Chandler might have written it. Tim [Hallinan] is a master at tossing out the kind of hard-boiled lines that I wish I thought of first."
—Bruce DeSilva, Macavity & Edgar Award-winning author of Rogue Island

“This is Hallinan at the top of his game. It's laugh-out-loud funny without ever losing any of its mystery. It’s a whole new style and I love it. Junior Bender—a crook with a heart of gold—is one of Hallinan's most appealing heroes, rich with invention, and brimming with classic wit. I can’t recommend it highly enough.”
—Shadoe Stevens, Late Late Show with Craig Ferguson

“Hallinan is a stunning talent.”
—Gregg Hurwitz, author of They're Watchingss