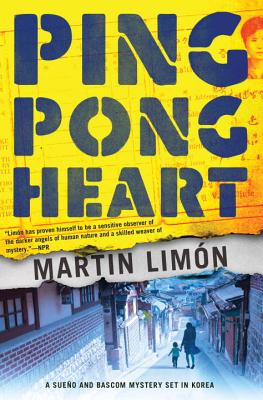 This is book number 11 in the A Sergeants Sueño and Bascom Novel series.

Looking into other motives for Schulz’s death, George and Ernie discover that the major was investigating the 501st Military Intelligence Battalion: the Army’s counterintelligence arm, solely dedicated to tracking North Korean spies. The division is rife with suspects, but it’s dangerous to speak out against them in a period of Cold War finger-pointing. As George and Ernie go head-to-head with the battalion’s powerful, intimidating commander, Lance Blood, they learn that messing with the 501st can have very personal consequences.

Martin Limón retired from military service after twenty years in the US Army, including ten years in Korea. He is the author of twelve books in the Sueño and Bascom series, including Jade Lady Burning, Slicky Boys, The Iron Sickle, The Ville Rat, The Nine-Tailed Fox, and the short story collection Nightmare Range. He lives near Seattle.

"Excellent . . . This is a highly atmospheric novel full of well-developed characters and strong emotional situations. The locales are so vividly described that you can almost breathe in the dust and touch the decaying buildings."
—Lansing State Journal

"Robbery, mayhem and murder are spiced by sardonic military humor in this lively thriller set in South Korea in 1974 when the Cold War was a good deal warmer."
—The Washington Times

"Series aficionados will welcome this 11th outing with its fast-moving convoluted crime and investigation. Newcomers don’t have to read the previous volumes to enjoy it either. Mystery readers who appreciate exotic settings, both in time and space, and who like quality buddy procedurals will admire Limón’s writing."
—Library Journal

Praise for The Ville Rat

"Often praised for his knowledge of Korean society and culture and the massive footprint of the U.S. Army on Korea, Limón has an outstanding series going, and this one may be the best installment yet."
—Booklist, Starred Review

"Sueño and Bascom's [10th] appearance has vivid characters, and its searing portrait of the sins of our recent past bids fair to transcend the genre."
—Kirkus Reviews