Fields Where They Lay (A Junior Bender Mystery #6) (Hardcover) 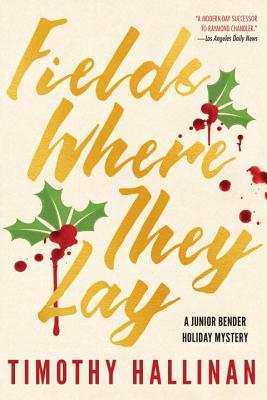 By Timothy Hallinan
$25.95
Email or call for price.

This is book number 6 in the A Junior Bender Mystery series.

It’s three days until Christmas and Junior Bender, Hollywood’s fasttalking fixer for the felonious, is up to his ears in shopping mall Santas, Russian mobsters, desperate holiday shoppers, and (’tis the season) murder.

The halls are decked, the deck is stacked, and here comes that jolly old elf. Junior Bender, divorced father of one and burglar extraordinaire, finds himself stuck inside the Edgerton Mall, and not just as a last-minute shopper (though he is that too). Edgerton isn’t exactly the epicenter of holiday cheer, despite its two Santas, canned Christmas music, chintzy bows, and festive lights. The mall is a fossil of an industry in decline; many of its stores are closed, and to make matters worse, there is a rampant shoplifting problem.

The murderous Russian mobster who owns the place has decided it takes a thief to catch a thief and hires Junior—under threat—to solve the shoplifting problem for him. But Junior’s surveillance operation doesn’t go well: as Christmas Eve approaches, two people are dead and it’s obvious that shoplifting is the least of the mall’s problems. To prevent further deaths, possibly including his own, Junior must confront his dread of Christmas—both present and past.

Timothy Hallinan has been nominated for the Edgar, Nero, Shamus, Macavity, and Silver Dagger awards. He is the author of twenty widely praised books, including the Poke Rafferty Bangkok thrillers, most recently Fools’ River, and the Junior Bender Hollywood burglar mysteries, including Herbie’s Game, winner of the Lefty Award for Best Humorous Mystery. After years of working in the television and music industries, he now writes full-time. He lives in California and Thailand.

Praise for Fields Where They Lay

"Comparisons to Raymond Chandler and Donald Westlake are totally deserved and should give you a clue as to whether you’ll like this book as much as I did."
—Raleigh News & Observer

"Wickedly funny . . . Somewhere amid all this suspense and uncertainty lies the true meaning of Christmas, assuming that Junior can stay alive long enough to see it."
—BookPage, Top Pick for December

“A plum pudding stuffed with cynical disillusionment, organized and disorganized crime, two Santas, a seasonal miracle, and an ending that earns every bit of its uplift.”
—Kirkus Reviews, Starred Review

"Nobody does comic mystery with an edge better than Hallinan."
—BookList, Starred Review

"I had never read [Hallinan], and don't know why I decided to read this Junior Bender—in May. Out of season. But I am so glad I did—Junior is quite the find."
—Marilyn Dahl, Shelf-Awareness

"Once again, Timothy Hallinan has given us a book to cheer, and a character to cheer for, but this outing is like a sweet little holiday story… with dead bodies, live crooks, and a wartime reminiscence that’s both heartwarming and terrifying."
—Schuler Books (Michigan)

"A must-read for all seasons."
—BookReporter.com

"Even if you hate the holidays with reasons just as good as Junior's—or especially if you do—this book is still the best gift you can give to yourself."
—Kingdom Books

"Masterful."
—Stop You're Killing Me!

"What a Christmas story would look like if Raymond Chandler wrote it."
—Deadly Diversions

"Hallinan has skillfully managed to write a story that manages both the cynical and hopeful sides of Christmas. It’s a good mix that Hallinan mines for its humorous promise—fighting off a gunman with the help of tinsel, anyone?—yet recognizes the humanity that is at the center of the holiday, even for someone as immune to warm fuzzies as a professional thief."
—Madison Public Library

"Do your friends a favor this Christmas—turn them on to Junior Bender."
—BookChase

“Run right out and get this book. It’s just fabulous.”
—NPR, Morning Edition

“Smart, refreshing and never dull, Hallinan’s vibrant King Maybe sees an author at the top of his game and a series in full, magnificent swing.”
—Los Angeles Review of Books

"[Hallinan] proudly carries the banner of the late Donald Westlake, whose books are the gold standard of antic capers. The result—lucky us—is a hoot and a half."
—The Seattle Times