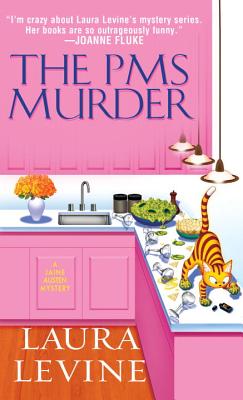 This is book number 5 in the A Jaine Austen Mystery series.

On the frontlines of the battle of the bulge, otherwise known as trying on bathing suits in the communal dressing room at Loehmann's, freelance writer Jaine Austen makes a new friend--a wannabe actress named Pam--and gets a new job: sprucing up Pam's bare-bones resume. Their feeling of connection is mutual, so Pam invites Jaine to join The PMS Club–a women's support group that meets once a week over guacamole and margaritas.

But joining the club proves to be more a curse than a blessing for Jaine. Though she is warned that Rochelle, the hostess, makes a guacamole to die for, Jaine never takes the warning literally. Until another PMS member, Marybeth, drops dead over a mouthful of the green stuff. Now instead of dishing dirt with The PMS Club, Jaine has to dig up the dirt on the surviving members. . .

"Jaine can really dish it out." --The New York Times Book Review