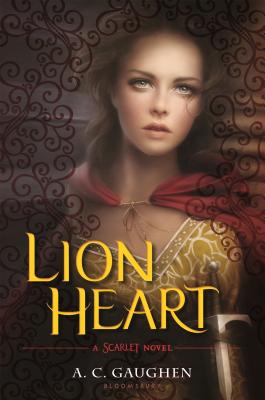 By A. C. Gaughen
Unavailable to Order
Out of Print

Scarlet has captured the hearts of readers as well as the heart of Robin Hood, and after ceaseless obstacles and countless threats, readers will finally find out the fate of the Lady Thief.

Imprisoned by Prince John for months, Scarlet finds herself a long way from Nottinghamshire. After a daring escape from the Prince's clutches, she learns that King Richard's life is in jeopardy, and Eleanor of Aquitaine demands a service Scarlet can't refuse: spy for her and help bring Richard home safe. But fate--and her heart--won't allow her to stay away from Nottinghamshire for long, and together, Scarlet and Rob must stop Prince John from going through with his dark plans for England. They can not rest until he's stopped, but will their love be enough to save them once and for all?

"Following in the tradition of Tamora Pierce's stories of feisty, kickass heroines and drawing on some factual underpinnings. . . Gaughen's tale will satisfy teen readers seeking action-packed romantic adventure set alluringly in another age. Fans of Scarlet will celebrate both this opportunity to revisit Gaughen's colorfully depicted long-ago world and her suspenseful ending to a lively story." —Kirkus Reviews

"A must-read series conclusion, sure to spark interest in the life and times of Richard the Lionhearted." —School Library Journal

"Scarlet is a worthy protagonist for adolescent female readers, and the love story between Robin and Marian adds starry-eyed entanglements to delight fans of that genre. The nonstop action that peppers the plot will entice male teens with a penchant for semihistorical fiction." —VOYA

"Debut novelist Gaughen does more than offer a rip-roaring tale, though it is that. The story, told in Scar's distinctive first-person voice, captivates and gets readers as deeply into the heart of a troubled girl . . . has plenty for both the romantic and the adventure lover." —Booklist on SCARLET

"Plenty of swashbuckling adventure and a hearty dose of romance power this re-imagining of the legend of Robin Hood." —School Library Journal on SCARLET