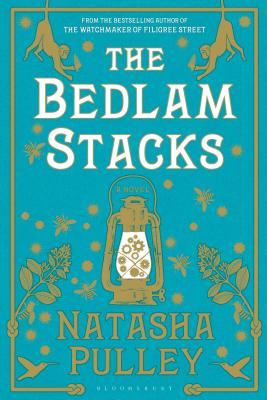 “The Bedlam Stacks is a gorgeously detailed historical fantasy novel that spans from England to China to Peru. The year is 1859, and Merrick Tremayne is enlisted by his former employer, the East India Trading Company, to smuggle ingredients for a crucial malaria treatment past the monopoly holders in Peru. Along the way, his story slips into fantasy as easily as sliding into warm water. Though Merrick begins his trip loyal only to the Company, his loyalties shift the longer he's away. Richly described and quietly romantic, this book is an absorbing and beautiful read.”
— Lillian Tschudi-Campbell, The Red Balloon Bookshop, Saint Paul, MN

An Indie Next Pick

In 1859, ex–East India Company smuggler Merrick Tremayne is trapped at home in Cornwall with an injury that almost cost him his leg. When the India Office recruits him for an expedition to fetch quinine--essential for the treatment of malaria--from deep within Peru, he knows it's a terrible idea; nearly every able-bodied expeditionary who's made the attempt has died, and he can barely walk. But Merrick is eager to escape the strange events plaguing his family's crumbling estate, so he sets off, against his better judgment, for the edge of the Amazon.

There he meets Raphael, a priest around whom the villagers spin unsettling stories of impossible disappearances, cursed woods, and living stone. Merrick must separate truth from fairy tale, and gradually he realizes that Raphael is the key to a legacy left by generations of Tremayne explorers before him, one which will prove more valuable than quinine, and far more dangerous.

Natasha Pulley studied English Literature at Oxford University. After stints working at Waterstones as a bookseller, then at Cambridge University Press as a publishing assistant in the astronomy and maths departments, she did the Creative Writing MA at UEA. She later studied in Tokyo, where she lived on a scholarship from the Daiwa Anglo-Japanese Foundation. She was chosen to be a Writer in Residence at Gladstone's Library and is now associate lecturer at Bath Spa University and panel tutor at the Cambridge University Institute of Continuing Education. Her first novel, The Watchmaker of Filigree Street, was an international bestseller, won a Betty Trask Award and was shortlisted for the Authors' Club Best First Novel Award. The Bedlam Stacks is her second novel. She lives in Bath.

"An epic journey . . . Pulley adroitly departs from the historical record to make the Peruvian story her own, turning it into a work for magic realism." - The New York Times Book Review

"The Peru that Markham and Tremayne encounter is a sheer fantastical delight. Exploding 'whitewood' trees, lamps made of glowing pollen, moving statues and rock formations of pure glass. Pulley also has a Tolkienian appreciation of the importance of cosiness: centrally heated ships' cabins, snug inns and lashings of hot coffee. What's more, she writes elegantly and plots like a pro." - The Times

"An immense treat for lovers of both historical fiction and the surreal." - The Observer, “Books of the Year”

"The imagination [Pulley] showed in her impressive debut was no fluke . . . Pulley understands her genre--swashbuckling costume fantasy--but she deals in surprises, not clichés . . . [A] meditation on love, trust, and the passage of time." - Starred Review, Kirkus Reviews

"Pulley is masterful at infusing The Bedlam Stacks with just the right amount of magical realism and mystery, making this story reminiscent of classic adventure tales of old while being relevant to today . . . Enchanting." - Shelf Awareness

"Pulley's beautifully descriptive language sets the stage for a mysterious and dangerous journey reminiscent of the grand scientific expeditions of the nineteenth century." - Booklist

"Impossible to put down until the end and highly re-readable, Pulley's second novel is magical." - San Francisco Book Review

"Natasha Pulley had a lot to live up to after the runaway success of her debut novel, The Watchmaker of Filigree Street. But she's managed to do just that with The Bedlam Stacks . . . It's a fast-paced adventure story with great characters and a message about colonialism and discovering new worlds . . . Filled with wondrous images, from moving statues to exploding trees." - The Glasgow Herald

"A fast-paced adventure story with great characters and a message about colonialism." - The Independent

"Natasha Pulley's captivating landscape unfolds slowly, her exquisitely crafted prose illuminating magical elements moving just at the edge of perception . . . The Bedlam Stacks is a lyrical paean to the power of transformation, faith and friendship." - BookPage

"[A] complex, immersive story . . . a marvelous mix of historical fiction and the fantastical." - Omnivoracious

"An exotic and magical mystery." - BookPage, "Top 10 Books for August"

"Fans of The Watchmaker of Filigree Street (who will be pleased that a character from that novel makes a cameo appearance) know that Pulley has a way with damaged characters who are looking for a new purpose in life. While there are steampunk elements, including clockwork lamps, there's also a subtle inexplicable magic running throughout the unusual, remote setting." - Library Journal

"The story's rich detail provides the reader a clear experience of 1850s Peru while imparting believability to its magic and imaginative elements. Its exciting style, humor and uniqueness are nothing short of charming. Enthusiastically recommended." - Historical Novel Society