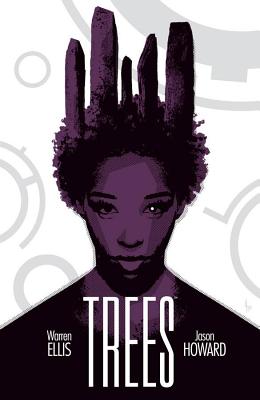 In the not-so-distant future, humanity has discovered that we are not alone in the universe. Huge monoliths have settled on the Earth like giant trees, exerting their pressure on the populace. Ten years later, we still know nothing about the alien craft. Cities in the shadow of the Trees have fallen into various states of chaos. And now, after a decade of silence, the Trees are preparing to speak. This book was so compelling. I waited far too long to pick this up, but it's quickly become one of my favorites. It follows characters spanning the globe, showcasing different cities around the world and the people who call them home. Highly recommended!

Collecting the second TREES story, TWO FORESTS. A survivor of the Blindhail Event looks for signs of imminent global disaster among the megaliths and relics of Orkney, while the new mayor of New York plans to extract his revenge for the awful thing that happened the day the Tree landed on Manhattan.