Without a Doubt (Hardcover) 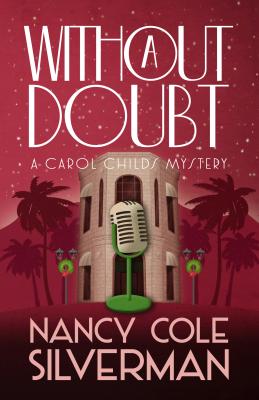 "An irresistible page-turner. Murders pile up along with bombs, car chases, and betrayal, but not without the droll humor that only a writer like Silverman knows how to blend into a story cozy readers won't soon forget." - Jill Amadio, Author of Digging Too Deep "Crackles with memorable characters, Hollywood legends, and as much action behind the mic as investigative reporter Carol Childs finds in the field. A fast-paced story of international jewel thieves and the politics that play out in the newsroom." - Mar Preston, Author of A Very Private High School "A rockin' thrill ride through the streets of LA and Bev Hills in search of stolen jewels and murderous thieves." - Paul D. Marks, Shamus Award-Winning Author of White Heat "Carol is a smart, savvy heroine that will appeal to readers. This is a cozy with a bite." - Rosemary Smith, Books for Avid Readers (on Shadow of Doubt) "Fast paced and cleverly plotted, an edgy cozy with undertones of noir." - Sue McGinty, Author of the Bella Kowalski Central Coast Mysteries (on Beyond a Doubt) "Silverman's books are un-put-downable and very well-written. Another stellar outing " - Goodreads As radio reporter Carol Childs investigates a series of Beverly Hills jewelry heists, she realizes her FBI boyfriend, Eric, is working the same case. Even worse, she may have inadvertently helped the suspect escape. The situation intensifies when the suspect calls the radio station during a live broadcast, baiting Carol deeper into the investigation. In order for her to uncover the truth, Carol must choose between her job and her personal relationships. What started out as coincidence between Carol and Eric becomes a race for the facts-pitting them against one another-before the thieves can pull off a daring escape, leaving a trail of dead bodies behind, and taking the jewels with them. Related subjects include: women sleuths, murder mystery series, whodunit mysteries (whodunnit), book club recommendations, suspense, noir. Books in the Carol Childs Mystery Series: -SHADOW OF DOUBT (#1) -BEYOND A DOUBT (#2) -WITHOUT A DOUBT (#3) Part of the Henery Press Mystery Series Collection, if you like one, you'll probably like them all... Author Bio: Nancy Cole Silverman credits her twenty-five years in news and talk radio for helping her to develop an ear for storytelling. But it wasn't until after she retired that she was able to write fiction full-time. Much of what Silverman writes about is pulled from events that were reported on from inside some of Los Angeles' busiest newsrooms where she spent the bulk of her career. She lives in Los Angeles with her husband, Bruce, and two standard poodles.