The Line (A Sergeants Sueño and Bascom Novel #13) (Paperback) 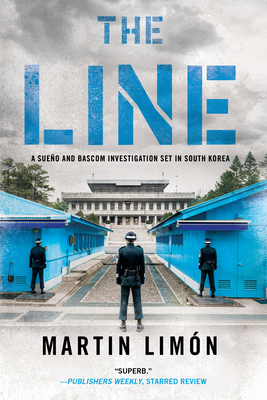 This is book number 13 in the A Sergeants Sueño and Bascom Novel series.

George Sueño and Ernie Bascom return for their thirteenth outing, which takes them from Seoul to the DMZ in their most politically charged murder case yet.

The Korean Demilitarized Zone, 1970s: A battered corpse is found a few feet north of the line dividing North and South Korea. When 8th Army CID Agents George Sueño and Ernie Bascom pull the body to the South Korean side on orders from their superiors, they have no idea of the international conflict their action will spark. Before war breaks out, they must discover who killed Corporal Noh Jong-bei, a young Korean soldier working with the US Army.

The murderer could be on either side of the DMZ. But without cooperation between the governments involved, how can two US military agents interrogate North Korean witnesses? What George and Ernie discover gets them pulled off the case, but fearing they’ve put the wrong man behind bars, they disobey orders in an attempt to discover the truth.

Martin Limón retired from military service after twenty years in the US Army, including ten years in Korea. He is the author of thirteen other Sueño and Bascom investigations: Jade Lady Burning, Slicky Boys, Buddha’s Money, The Door to Bitterness, The Wandering Ghost, GI Bones, Mr. Kill, The Joy Brigade, The Iron Sickle, The Ville Rat, Ping-Pong Heart, The Nine-Tailed Fox, and GI Confidenital, as well as the short story collection Nightmare Range. He lives near Seattle.

Praise for The Line

“A fascinating inside look at Korean culture as well as the world of overseas Army personnel in the late 1970s.”
—Ellery Queen Mystery Magazine

“The thirteenth novel in this outstanding series is one of Martin Limon's best . . . [Limon] brings an authenticity to the stories of soldiers caught in the machinery of the post-War era . . . It is all told with an irreverent humor, yet the tension never lets up.”
—Deadly Pleasures Magazine

“Limón's fiction comes from personal experience, with some obvious parallels between his own life and main protagonist Sueño's. As well as sharing a Hispanic heritage, Limón also served in Korea, first arriving in 1968 . . . Rare foreign fiction set in Korea.”
—The Korea Times

“Superb . . . Limón has never been better at incorporating a logical mystery plot into the politics of his chosen time and place.”
—Publishers Weekly, Starred Review

“One of the most powerful episodes in an always-strong series.”
—Booklist, Starred Review

“[The Line] entertains with its easy banter and fascinates with deep insight into its precise historical moment.”
—Kirkus Reviews

“I have read every Limón book since 1992’s Jade Lady Burning, and I have every intention of continuing to do so; they are that good.”
—Bruce Tierney, BookPage

Praise for the Sueño and Bascom Investigations

“Limón is one of the best military writers ever. His stories are addictive entertainment today—and valuable slices of history tomorrow.”
—Lee Child

“Limón is an expert guide to Korea and the US army whose passionate commitment to his subject is expressed in direct, searing prose.”
—John Burdett, international bestselling author of Bangkok 8

“As always, the author vividly contrasts adventures in the seamy side of Seoul’s nightlife with a sensitive appreciation for Korea’s ancient culture.”
—The Seattle Times

“A fast-paced, action-packed yarn that will keep you glued to your seat from the first page to the last.”
—San Antonio Express-News

Praise for The Nine-Tailed Fox

“A fast-paced, action-packed yarn that will keep you glued to your seat from the first page to the last.”
—San Antonio Express-News​