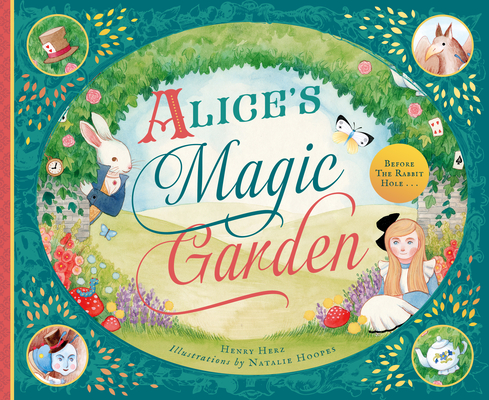 By Henry Herz, Natalie Hoopes (Illustrator)
$16.99
On Our Shelves Now

In this imaginative prequel to Alice's Adventures in Wonderland, Alice finds herself at a gray, dreary boarding school that is decidedly up the rabbit hole. From the relentless clocks to the beastly students, Alice's world is void of color and cheer—until Alice finds a secret garden and begins tending its wilting inhabitants. When Alice's love touches an ordinary caterpillar, a lory bird, and a white rabbit, magical things will happen—and that, as you know, is just the beginning of the story. Filled with literary allusions and clever nods to its classic roots, Alice's Magic Garden is a delightful prequel that begs an escape to the whimsy of Wonderland.

Natalie Hoopes was born with a head full of wild ideas. She decided that only way to get them out was to be a painter. She has recently graduated from Brigham Young University with a BFA in Illustration. Her artwork has been published in the The Friend, New Era and Liahona magazines. She currently lives in Utah with her husband and far too many books.

"Paintings in lovely pastel shades take over, and from then on, Alice's world changes. She is depicted in color, while the rest of her unkind classmates stay black and white, even when they enter the idealized garden. Her kindness to creatures she finds in the garden—a rabbit, a caterpillar, and a lory bird (a type of small parrot)—endear her to them, and they, in turn, become characters familiar from the classic . . . Best of all, the magical trio promises friendship forever"
—Kirkus Reviews

"This is a cute story that will demonstrate the importance of kindness to youngsters".
—San Francisco Book Review​