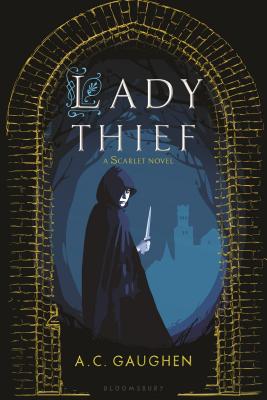 By A. C. Gaughen
Unavailable to Order
Special Order

Scarlet and Robin Hood have overcome danger and death to protect the people of Nottinghamshire--but Scarlet's past comes back to haunt her when the plotting Prince John and his royal court descend upon Nottingham. The prince brings with him plans that involve the ruthless Lord Gisbourne, the man Scarlet was forced to marry, and a fateful secret about Scarlet.

Scarlet must put aside her weapons and boys' clothing to join the dark machinations of the court. But as she fights to outwit the prince and win a future with Rob, she stumbles upon a truth hidden within the court that no one was ever supposed to discover. When the truth is revealed, the consequence will be a price Scarlet never thought she would have to pay.

"Debut novelist Gaughen does more than offer a rip-roaring tale, though it is that. The story, told in Scar's distinctive first-person voice, captivates and gets readers as deeply into the heart of a troubled girl. . . has plenty for both the romantic and the adventure lover." - starred review, Booklist on SCARLET

"Plenty of swashbuckling adventure and a hearty dose of romance power this re-imagining of the legend of Robin Hood." - Publishers Weekly on SCARLET