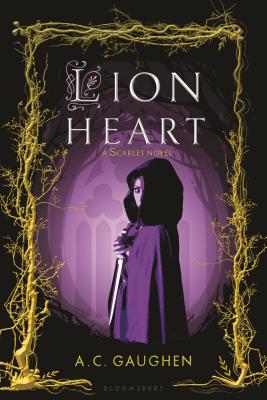 Locked away in prison, Scarlet finds herself a long way from Nottinghamshire. After a daring escape, she learns that King Richard's life is in jeopardy, and Eleanor of Aquitaine needs Scarlet's help to free him. But Scarlet knows that this will put her and those she loves back in evil Prince John's sights. Desperate not to risk anyone else's life, Scarlet plans to help save the king on her own. But fate--and her heart--won't allow her to stay away from Nottinghamshire for long. Even if Scarlet and Rob can finally stop Prince John from going through with his dark plans for England, will their love be enough to save them once and for all?

"Debut novelist Gaughen does more than offer a rip-roaring tale, though it is that. The story, told in Scar's distinctive first-person voice, captivates and gets readers as deeply into the heart of a troubled girl. . . has plenty for both the romantic and the adventure lover." - starred review, Booklist on SCARLET

"Plenty of swashbuckling adventure and a hearty dose of romance power this re-imagining of the legend of Robin Hood." - Publishers Weekly on SCARLET