Queer as a Five-Dollar Bill (Paperback) 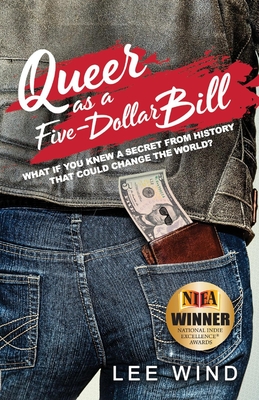 “A tapestry of the gay teenage experience—frayed edges repaired with earnest love and care.” —Kirkus Reviews

Wyatt is fifteen, and nobody in his homophobic small town of Lincolnville, Oregon, knows that he’s gay. Not even his best friend (and accidental girlfriend) Mackenzie.

Then he discovers a secret from actual history: Abraham Lincoln was in love with another guy! Since everyone loves Lincoln, Wyatt’s sure that if the world knew about it, they would treat gay people differently and it would solve everything about his life. So Wyatt outs Lincoln online, triggering a media firestorm that threatens to destroy everything he cares about.

Now he has to pretend more than ever that he’s straight (because no one will ever believe a gay kid saying Lincoln is gay.) Only then he meets Martin, who is openly gay and who just might be the guy Wyatt’s been hoping to find.

This nineteenth-and-twenty-first-century coming-of-age, coming out story was inspired by real historical evidence that Abraham Lincoln was in love—romantic love—with another man. QUEER AS A FIVE-DOLLAR BILL asks LGBTQ teens (and everyone else), What if you knew a secret from history that could change the world?

“Compelling… with highly empathetic characters in Wyatt and his friends. Was Abraham Lincoln gay? Readers of this intriguing and readable novel will decide for themselves.” —Michael Cart, ALA Booklist

“This one should get people talking! I hope this book…finds the large audience it deserves.” —Brent Hartinger, author of 12 novels, including the groundbreaking gay teen novel Geography Club

Fans of Becky Albertalli’s Simon vs. the Homo Sapiens Agenda and What If It’s Us shouldn’t miss Queer as a Five-Dollar Bill!

Lee Wind is the founding blogger and publisher of I’m Here. I’m Queer. What The Hell Do I Read?, an award-winning website about books, culture, and empowerment for Lesbian, Gay, Bi, Trans, Questioning, and Queer youth, and their Allies. For over 11 years, readers from 100-plus countries have racked up 2.6 million page views—and counting!

In his “Clark Kent” jobs, Lee is the director of marketing and programming at the Independent Book Publishers Association and the official blogger for the Society of Children’s Book Writers and Illustrators. His Superhero job is writing, inspired by our world’s amazing—and untold—LGBTQ history.

Fans of his first novel, Queer as a Five-Dollar Bill describe Lee’s writing as ”a love letter for history geeks” that is “engrossing, moving, fun” and “powerful.” . Lee ”writes with passion and clarity, weaving in important words regarding bullying, coming out acceptance and equality,”saying “I wish I had read this in middle school” and that his book “belongs in every library that serves teens.”

Lee lives in Los Angeles with his husband and their teenage daughter. Queer as a Five-Dollar Bill is his debut novel. Visit him online at www.leewind.org

“Wind’s engaging, utterly enjoyable tale of teen self-discovery is riveting both for its well-structured, historically based plot and its emotional honesty. . . . Wind’s polished prose is filled with laugh-out-loud moments. . . . A resonant and admirably crafted work.” —Book Life Prize

“The premise is a real hook . . . with real potential to influence and educate, on top of entertaining. . . . A tapestry of the gay teenage experience—frayed edges repaired with earnest love and care.” —Kirkus Reviews​

“Bound to spark curiosity . . . A sympathetic novel that will change the way young readers look at history and the lessons it has to teach.” —Foreword Reviews

“Compelling… with highly empathetic characters in Wyatt and his friends. Was Abraham Lincoln gay? Readers of this intriguing and readable novel will decide for themselves.” —Michael Cart, ALA Booklist

“All the more impressive when considering that it is author Lee Wind's debut as a novelist. Entertaining, thought- provoking, Queer as a Five-Dollar Bill is recommended for school and community library YA fiction collections. —Midwest Book Review

“This one should get people talking! I hope this book, which shines some much-needed light on a fascinating bit of history, finds the large audience it deserves.” —Brent Hartinger, author of 12 novels, including the groundbreaking gay teen novel Geography Club

“Lee Wind has written a courageous novel about facing truth, both in history and in yourself. I applaud this important book.” —Ellen Wittlinger, author of 14 novels, including the Lambda Literary Award– and Printz Honor Award–winning Hard Love

“This powerful novel combines raw emotion with detailed historical evidence. Readers will be drawn into Wyatt’s story as he struggles with being true to himself, and come out the other side questioning who writes the history we learn. Speaking truth to power, indeed. Queer as a Five-Dollar Bill belongs in every library that serves teens.” —Yapha Mason, school librarian and two-time Newbery Medal judge