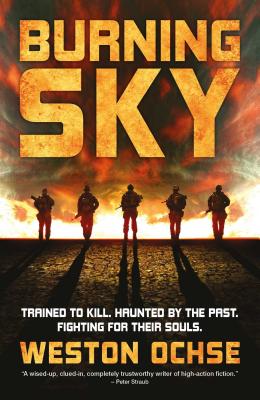 Everything is dangerous in Afghanistan, nothing more so than the mission of a Tactical Support Team or T.S.T. All veterans, these men and women spend seasons in hell, to not only try and fix what’s broken in each of them, but also to make enough bank to change their fortunes.

But seven months later, safely back on American soil, they feel like there’s something left undone. They’re meeting people who already know them, remembering things that haven’t happened, hearing words that don’t exist. And they’re all having the same dream… a dream of a sky that won’t stop burning.

WESTON OCHSE is a writer of nearly thirty books in multiple genres. His young adult novel Ghost Heart, co-written with Yvonne Navarro, has been compared to both The Dark Tower and Something Wicked This Way Comes. His military supernatural series SEAL Team 666 has been optioned to be a movie starring Dwayne Johnson and his military sci fi trilogy, which starts with Grunt Life, has been praised for its PTSD-positive depiction of soldiers at peace and at war. Weston has also published literary fiction, poetry, comics, and non-fiction articles. His shorter work has appeared in DC Comics, IDW Comics, Soldier of Fortune Magazine, Cemetery Dance, and peered literary journals.

His franchise work includes the X-Files, Predator, Aliens, Hellboy, Clive Barker’s Midian, and V-Wars. Weston holds a Master of Fine Arts in Creative Writing and teaches at Southern New Hampshire University. When he's not being deployed to Afghanistan, he lives in Arizona with his wife, and fellow author, Yvonne Navarro and their Great Danes.