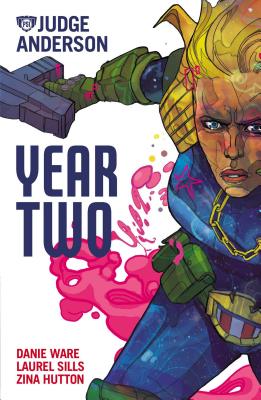 The story behind Mega-City One's most famous telepath and Judge Dredd partner, Judge Anderson, in her second year as a Judge! Follow-up to the cult sensation Judge Anderson Year One!

In years to come, Cassandra Anderson will be a living legend, Psi-Division’s most famous Judge. But for now it’s 2101, and a young Judge Anderson is in her second year out of the Academy, the Eagle still gleaming on her shoulder. It’s time to put her training—and her judgement—to the test.

Three original stories from female authors have Anderson taking on biker gangs and reclusive celebrities, cults and reluctant partners, and a psychic team of murderers…

Danie Ware is the author of the critically acclaimed Ecko series, out now from Titan Books and Children of Artifice, an urban fairy story, out from Fox Spirit Books. She also writes Sisters of Battle for the Black Library, and has short stories published in numerous anthologies. She lives in Carshalton, south London, with her son and two cats.

Laurel Sills is a writer and editor who lives in South East London with her partner, daughter and two cats. She’s had stories published in Sharkpunk and Game Over, both with Snowbooks. She was the co-founder and editor of the award-winning Holdfast Magazine.