The Count of 9 (Paperback) 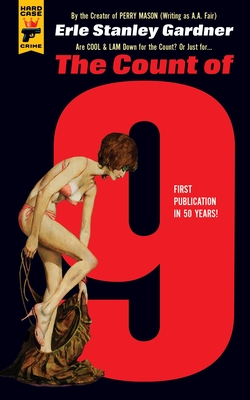 From the world-famous creator of "Perry Mason," Erle Stanley Gardner comes another baffling case for the Cool & Lam detective agency.

Erle Stanley Gardner was not just the creator of PERRY MASON - at the time of his death, he was the best-selling American author of all time, with hundreds of millions of books in print, including the 29 cases of the brash, irresistible detective team of Bertha Cool and Donald Lam. Gardner was also one of the most ingenious plot-spinners in the field, coming up with stunning twists and reveals... and THE COUNT OF 9 is Gardner at his twistiest.

Hired to protect the treasures of a globe-trotting adventurer, Bertha and Donald confront an impossible crime: how could anything be smuggled out of a dinner party - least of all a 6-foot-long blowgun - when the guests were X-rayed coming and going? But that's nothing compared to the crime they face next: AN IMPOSSIBLE MURDER...

One of the best-selling authors of all time, Erle Stanley Gardner's greatest creations include crusading attorney Perry Mason (star of more than eighty novels, a TV series and TV movies) and the hardboiled detective team of Bertha Cool and Donald Lam, who appeared in more than two dozen adventures. An attorney himself, Gardner also founded the Court of Last Resort, a group that investigated criminal cases they believed had ended in wrong convictions.

“A good read...I recommend picking up a copy of this from Hard Case Crime” -- Black Gate

"This reissue of THE COUNT OF 9 serves as a reminder of both what we had and what we lost in the golden era of paperbacks, right down to the new and eye-riveting cover by the incomparable Robert McGinnis. It is required reading for any fan of hard-boiled detective fiction who is interested in where the wellspring of his or her favorite novels came from, at least in part." -- BookReporter

"A classic vintage mystery that modern readers would never encounter except for its reissuance here from Hard Case Crime."- Bookgasm