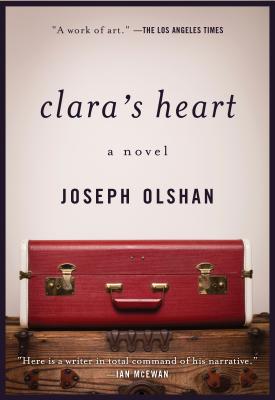 “Joseph Olshan writes with aching sensitivity and depth. One always has the sense that he cares fervently about his characters, for he illuminates their lives, with delicate tenderness, from within.”- Louise Erdrich


“A fresh and involving novel. Joseph Olshan has remarkable empathy with his characters, and he writes some scathingly funny and perceptive scenes. As I read this novel I kept thinking, ‘this is a story I have never read before, but I believe these people totally.’” —Gail Godwin


“An impressive novel. . . . Clara’s Heart is notable precisely because of the risks Joseph Olshan has taken that do succeed, not the least of which is its sensitive and often comical treatment of the unique love between a precocious American boy and a wise, if tormented Jamaican woman.” —The New York Times Book Review

“Olshan’s achievement is to have created a separate and entirely believable world, carefully, comically and humanely drawn. It is held together by much tension and contains many excellent and recognizable scenes and embarrassments. . . A fine debut.” —The Times Literary Supplement (London)


“Joseph Olshan skillfully juxtaposes two very different cultures, the financially successful but emotionally deficient Harts, the products or victims of a modern ago, and the relatively poor in money,but rich in warmth and spirit, Jamaicans.” —The Washington Post


“Intelligently conceived and psychologically convincing. . . [Olshan is] someone to read and watch.” —The Financial Times


“In Clara’s Heart lies a depth of feeling that is rarely told so well.” —The Times (London)


“Terrific. Joseph Olshan is clearly enormously talented. He has an almost extra-sensory understanding of the characters he writes about, and he writes magnificently well. He is funny, too.”


“Clara is a triumphant creation, with all her provocative richness and scariness. The gently perceptive novel about coming of age in suburbia maintains a high level of narration in unfolding a relationship that is as delicious as it is fleeting. After the book is closed its fragrant intensity lingers.” —New York Newsday


“With its intricate characterization, a plot that weaves together two very different cultures, and a narrative enriched by fresh, often poignant dialogue, this is an extraordinary first novel. The intensity of their friendship, and the dark secret of her past that Clara is determined to hide from David, creates an emotional chaos that is skillfully portrayed and finally resolved in this wonderful novel.” —Publishers Weekly


“In language that is devastatingly accurate in tone and intensity, Joseph Olshan has painted a complex portrait on an unusual couple meeting under unusual circumstances and very often clashing, as their cultures clash, but emerging triumphant in an ending that will satisfy even the most hard-boiled reader. Olshan is a remarkably