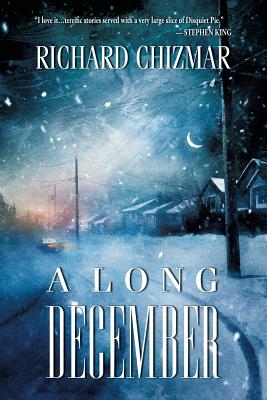 By Richard Chizmar, Ben Baldwin (Cover Design by)
$27.45
On Our Shelves Now

Richard Chizmar, the editor and publisher of Cemetery Dance Magazine, presents a masterclass collection of his own horror stories. His forthcoming novel, GWENDY’S BUTTON BOX, co-written with Stephen King, will make him a household name, but his original work is a chilling exploration of family, loss, and regret. Everyday men and women are pushed to horrific extremes, but their lives and deaths are tempered with humanity. In his heartbreaking, post-apocalyptic story, “After the Bombs,” when a man searching for his father asks, “How did he die?”,  an old blind man replies, “I’d rather tell you how he lived.” Memories are a recurring theme in these stories, but they are lies protecting us from the truth. You’ll find many memory boxes of various shapes and sizes, each one a metaphor for a secret self, filled with awful and amazing revelations. In the titular story, the friend of a killer says with bitter irony, “It’s funny the things you remember—and forget.” These tales will haunt you like photos of the dead.

In 1996, Richard Chizmar's debut short story collection, Midnight Promises, was a finalist for the World Fantasy Award. Publishers Weekly called it "a sterling collection" while singling out "The Silence of Sorrow" as "an understated masterpiece."

Two years later, Subterranean Press published a mini-collection from Chizmar entitled Monsters and Other Stories. In his introduction, acclaimed genre critic Edward Bryant said, "When all is said and done, this book should leave you in utter silence, giving you time and opportunity to contemplate what you just read. Tough storytelling from a tough writer; but a writer who is not calloused. Chizmar possesses a finely honed gift of empathy. With utter grace and loving kindness he'll put you right inside the life (and soul) of the monster."

Eerie, suspenseful, poignant, the stories in A Long December range from horror to suspense, crime to dark fantasy, mainstream to mystery.

As New York Times bestselling author Scott Smith (A Simple Plan, The Ruins) notes: "It's an idyllic little world Richard Chizmar has created. Boys fish in the shallows of a winding creek. A father tosses a baseball with his young son in the fading light of a summer day. There's the smell of fresh-cut grass. And then, well...just beneath the surface? There are those missing pets whose collars turn up in a shoebox. Or the disturbing photos the dead can leave behind. Or the terrible thing you might find yourself doing when a long lost brother suddenly returns, demanding money. Chizmar does a tremendous job of peeling back his world's shiny layers, revealing the rot that lies underneath. His stories feel like so many teeth: short and sharp and ready to draw blood."