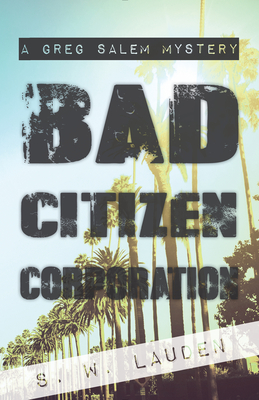 This gritty debut took me on an adrenaline-fueled journey through the dark alleys of East Los Angeles to the dive bars of the South Bay. Greg Salem is a Virgil Heights cop who is still recognized by punk rock fans as Fred Despair, the lead singer of Bad Citizen Corporation. He still plays the occasional gig but his punk rock days are far behind him. At least that’s what he thought. After his guitarist/best friend is murdered, Salem vows to bring the killer to justice despite his recent suspension from the department. With the help of his drummer/friend Marco, Salem dives right back into the underworld of his hometown filled with greedy land developers, drug dealers, and old flings. BCC is hard core, in-your-face, blast-the-roof-off storytelling, and as a longtime Hermosa Beach resident, it’s about damn time a novel pays proper homage to the birthplace of Pennywise and Black Flag.

An East Los Angeles police officer by day and a beach cities punk rock legend by night, Salem is forced into action when his two worlds violently collide. The search for his friend's murderer takes him on a treacherous journey through the murky waters of his hometown, forcing him to explore the dark corners of his sun-soaked world. Without a badge to hide behind any longer, he enlists the help of his drug-addict drummer Marco to help him solve the crime. Over the course of ten days, they survive vicious beatings, car chases, love triangles, kidnapping, and betrayal on Salem's road to self-discovery.

S. W. Lauden's short fiction has been published by Out of the Gutter, Criminal Element, Dark Corners, Dead Guns Magazine, Akashic Books, WeirdBook, Spelk Fiction, Shotgun Honey, and Crimespree Magazine. Bad Citizen Corporation, the first installment of the Greg Salem thrillers, was his debut novel published by Rare Bird Books in 2015. His novella, Crosswise, was published by Down & Out Books in 2016.