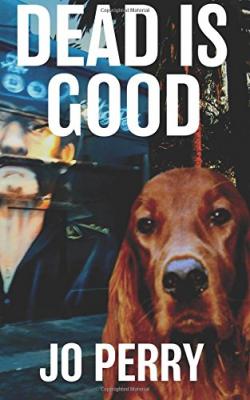 By Jo Perry
Email or call for price.
Special Order

A woman opens fire on the North Hollywood Police Precinct and is almost immediately shot dead by the L.A.P.D. Another woman throws herself off the edge of Santa Monica Pier. One is suicide, one is art… Welcome to the world of Charlie & Rose, everyone’s favourite ghost detectives. Summoned once again from the afterlife, and cursed by death to only ever be on-lookers into the lives of the living, Charlie and his dog companion Rose do their best to protect the only woman Charlie has ever loved. Life, it seems, is much more complicated than death, and very quickly Charlie & Rose find themselves attempting to untangle a complicated and deadly web of suicide, art, drug gangs and the illegal sweat-shops of downtown Los Angeles.

Jo Perry is the author of DEAD IS BETTER, DEAD IS BEST and DEAD IS GOOD, dark comic mysteries published by Fahrenheit Press. She earned a Ph.D. in English, taught college literature and writing,produced and wrote episodic television, and has published articles, book reviews, and poetry. She lives in Los Angeles with her husband, novelist Thomas Perry. Their three cats and two dogs are rescues. DEAD IS BETTER was her first novel. DEAD IS BEST, the second in the Charlie and Rose series, was published in 2016 by Fahrenheit Press and chosen by Bibliophile Bookclub as among the Top 13 Books & Series of 2016.

'Dead is Good is a metaphysical detective novel: a meditation on the meaning of life—and of death. It’s also an evocative and wickedly funny portrait of Los Angeles, a city whose disparate communities barely seem to connect. But connect they do, and Perry draws the line between exploited downtown garment workers and ostentatious Beverly Hills McMansions with the sarcastic, chronically dissatisfied Charlie and his sweet-tempered dog, Rose as our guides. Sure, they’re both dead, but they live and breathe as characters whom you want so much to find some form of peace and happiness. I can’t wait for their next case." Lisa Brackmann, critically acclaimed author of the Ellie McEnroe novels, (Rock Paper Tiger, Hour of the Rat, Dragon Day), Getaway, The Go-Between and others. "Jo Perry's DEAD IS GOOD is the best book yet in a solid-gold series: funny, sad, suspenseful, and totally original. They're set in a world in which the dead can observe the living -- including those they love -- but can't lend a hand. And her often-beautiful prose is uniquely her own." Timothy Hallinan