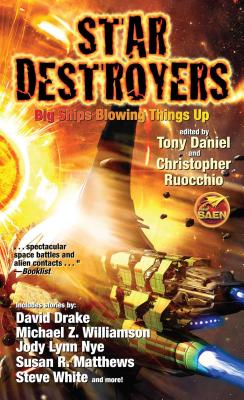 Boomers. Ships of the Line. Star Destroyers. The bigger the ship, the better the bang. Thus it was, and ever shall be, even into the distant future.

In “Superweapon,” by David Drake, a fight for possession of an ancient alien warship will determine the fate of two vast interstellar powers. Then in “Hate in the Darkness” by Michael Z. Williamson, a team of libertarian Freeholders must think outside the box to do battle with the might of the United Nations and its powerful navy. And in “A Helping Hand,” Jody Lynn Nye posits an interstellar submarine on a rescue mission behind enemy lines—with the fate of an entire species hanging in the balance.

About Star Destroyers:
“. . . spectacular space battles and alien contacts . . .  themes of military ethics, the uses of artificial intelligence, and the limits of the capacity of the human mind. . . . it is the human interactions and decisions that ultimately drive the stories. . . . will appeal to fans of military and hard science fiction and any readers fascinated by the possibilities of space travel.”—Booklist

“. . . stories of giant spaceships at war, at peace, and in the often-gray areas between. . . . a worthy addition to a long tradition of ship-based fiction, and its authors portray captains, arcane astrogators, and civilian child passengers with equal depth. It’s recommended for fans of military SF and space adventure.”—Publishers Weekly

“. . . you’d probably expect some tight, action-filled space opera stories of giant space battles . . . and there’s some of that. But there are also espionage stories, rescue missions, political conflicts, alternate histories, even a few humorous tales. . . . each author took the premise in a different direction . . . if I had to identify one common feature to all the stories, it would be that they’re all fun. . . . Like it says, big ships blowing things up. What’s not to like?”—Analog

Tony Daniel is a senior editor at Baen Books. He is also the author of ten science fiction novels, the latest of which is Guardian of Night, as well as an award-winning short story collection, The Robot’s Twilight Companion. He’s a Hugo finalist and a winner of the Asimov’s Reader’s Choice Award for short story. Daniel is also the author of young adult high fantasy Wulf’s Saga series including entries The Dragon Hammer and its sequel, The Amber Arrow. Other Daniel novels include the ground-breaking Metaplanetary and Superluminal, as well at Warpath, an adaptation of the novelette “Candle,” which appeared in Asimov’s magazine. His second novel, Earthling, also started life as “The Robot’s Twilight Companion,” appearing in Asimov’s. Daniel is the coauthor of two books with David Drake in the long-running General series, The Heretic and The Savior. He is also the author of original series Star Trek novels Devil’s Bargain and Savage Trade. Daniel’s short stories have been collected in multiple year’s best compilations. In the late 1990s, he founded and directed the Automatic Vaudeville dramatic group in New York City, with multiple appearances doing audio drama on WBAI.  He’s also co-written the screenplays for several horror movies that have appeared on the SyFy and Chiller channel, including the Larry Fesenden directed Beneath. During the early 2000s, Daniel was the writer, story editor, and sometimes director of numerous radio plays and audio dramas with actors such as Peter Gallagher, Oliver Platt, Stanley Tucci, Gina Gershon, Luke Perry, Tim Robbins, Tim Curry and Kyra Sedgewick appearing in them for SCI-FI.COM’s groundbreaking Seeing Ear Theatre.  He’s the founder of Baen Books Audio Drama and has written, produced, and directed a series of adaptations of the works of Baen Books authors such as Eric Flint and Larry Correia. Daniel has a B.A. from Birmingham-Southern College, where he majored in philosophy. He has a Masters in English from Washington University in St. Louis.  He attended the USC Film School graduate program and Clarion West. Born in Alabama, Daniel has lived in St. Louis, Los Angeles, Seattle, Prague, New York City, Dallas, and Raleigh, North Carolina, where he currently resides with his wife Rika, and children Cokie and Hans.

Christopher Ruocchio is the author of the Sun Eater Chronicle, a space opera series from DAW Books, the first novel of which, Empire of Silence, is available now from booksellers everywhere. He is also the Assistant Editor at Baen Books and a graduate of North Carolina State University. He lives in Raleigh, North Carolina.