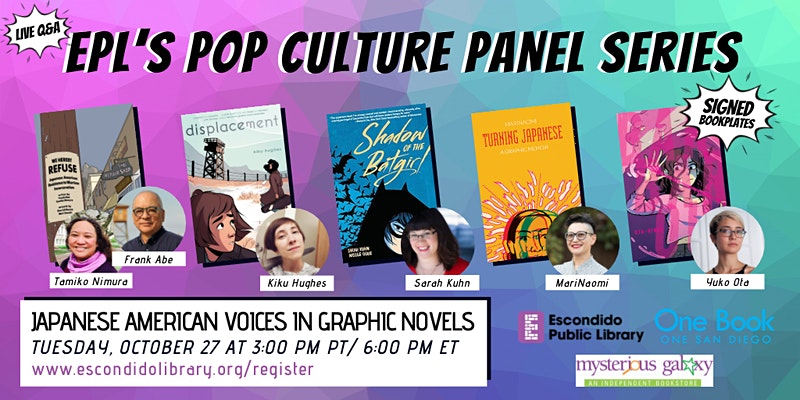 Books by the authors are for available for purchase below!

On the date of the event, any books purchased from  Mysterious Galaxy  by Yuko Ota come with SIGNED bookplates.

This panel will be moderated by Jessica Buck, Adult Services Librarian.

This event is part of the One Book, One San Diego programming.

Have questions for the authors? Email library@escondidolibrary.org

Books by the author are available for checkout on the library catalog, Hoopla, and CloudLibrary.

This Author Chat Series is brought to you by the Friends of the Escondido Public Library and Mysterious Galaxy.

Frank Abe won an American Book Award for JOHN OKADA: The Life & Rediscovered Work of the Author of No-No Boy(University of Washington Press). He made the award-winning PBS documentary, Conscience and the Constitution, on the largest organized resistance to the incarceration of Japanese Americans, and is collaborating on a new graphic novel on camp resistance, We Hereby Refuse, coming in 2021. He is also co-editing an anthology for Penguin Classics on The Literature of Japanese American Incarceration (winter 2021).

Kiku Hughes is a cartoonist and illustrator based in the Seattle area. Her work has been featured in Beyond Anthology volumes 1 and 2, Short Box #6 and the Alloy Anthology. She creates stories about identity, queer romance and compassionate sci-fi. Displacement is her first graphic novel, and it is a story she's wanted to share for as long as she can remember.

Sarah Kuhn is the author of the popular Heroine Complex novels—a series starring Asian American superheroines. The first book is a Locus bestseller, an RT Reviewers’ Choice Award nominee, and one of the Barnes & Noble Sci-Fi & Fantasy Blog’s Best Books of 2016. Her YA debut, the Japan-set romantic comedy I Love You So Mochi, is a Junior Library Guild selection and a nominee for YALSA’s Best Fiction for Young Adults. She has also penned a variety of short fiction and comics, including the critically acclaimed graphic novel Shadow of the Batgirl for DC Comics and the Star Wars audiobook original Doctor Aphra. Additionally, she was a finalist for both the CAPE (Coalition of Asian Pacifics in Entertainment) New Writers Award and the Astounding Award for Best New Writer. A third generation Japanese American, she lives in Los Angeles with her husband and an overflowing closet of vintage treasures.

MariNaomi (she/they) is the award-winning author and illustrator of Kiss & Tell: A Romantic Resume, Ages 0 to 22 (Harper Perennial, 2011), Dragon's Breath and Other True Stories (2dcloud/Uncivilized Books, 2014), Turning Japanese (2dcloud, 2016), I Thought YOU Hated ME (Retrofit Comics, 2016), and the Life on Earth trilogy (Graphic Universe, 2018-2020). Her work has appeared in over eighty print publications and has been featured on websites such as The New Yorker's Daily Shouts, The Rumpus, LA Review of Books, Midnight Breakfast and BuzzFeed. MariNaomi's comics and paintings have been featured by such institutions as the Smithsonian, the De Young Museum, the Cartoon Art Museum, the Asian Art Museum, and the Japanese American Museum.

Tamiko Nimura is a Sansei/Pinay freelance writer, editor, and public historian, contributing regularly to Discover Nikkei and the International Examiner. She is collaborating on a new graphic novel on camp resistance, We Hereby Refuse, coming in 2021.

Do I have to live in California or Escondido in order to participate? No, this is a virtual event that is open to the public, regardless of residency.

Is there a cap on attendance? There is no maximum capacity for the Facebook stream.

John Okada: The Life and Rediscovered Work of the Author of No-No Boy (Paperback)

Shadow of the Batgirl (Paperback)

I Love You So Mochi (Point Paperbacks) (Paperback)

Our Cats Are More Famous Than Us: A Johnny Wander Collection (Hardcover)

Pixels of You (Paperback)