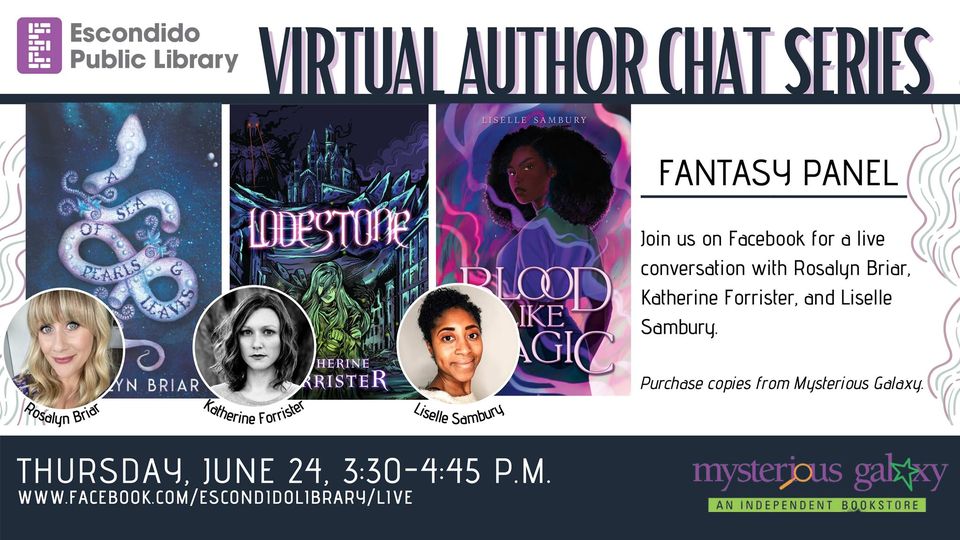 Join us on Facebook for a live conversation with Rosalyn Briar, Katherine Forrister, and Liselle Sambury.

View our virtual event code of conduct here. Please note that it applies to all attendees, authors, and moderators and is to ensure our event spaces stay a positive, welcoming place for respectful discussions and multiple perspectives.

About the Panelists
Jessica Buck (she/her) is an Adult Services Librarian at the Escondido Public Library where she focuses on reference services, outreach, and programming. Jessica hosts various author chats as well as the library’s Between the Covers Romance Book Club. Follow her on twitter @mrsjgbuck and Instagram @romancelibrarian.

Rosalyn Briar is a mother and a wife living near St. Louis, MO. She is a former teacher and has many creative hobbies. Writing quickly became her passion a few years ago. The Crown of Bones is her debut novel. She loves to write dark fantasy novels that dip into the horror genre and always have a splash of romance.  Learn more at https://www.rosalynbriar.com/

Katherine Forrister is an author of speculative fiction with a love of fantasy, history, science, and romance. Her dark fantasy romance novel, Lodestone, is forthcoming from GenZ Publishing in 2021, her historical fantasy romance, The Hand-me-down Maiden, is forthcoming from GenZ Publishing in 2022, and her science fiction romance novel, Curio Citizen, is forthcoming from Inkshares, Inc. She lives near Kansas City with her family, where she enjoys local festivals and conventions, hiking, playing open-world video games, and curling up on the sofa to read on cold winter days. Learn more at https://katherineforrister.com/

Liselle Sambury is a Toronto-based Trinidadian Canadian author. Her brand of writing can be described as “messy Black girls in fantasy situations.” She works in social media and spends her free time embroiled in reality tv because when you write messy characters you tend to enjoy that sort of drama. She also shares helpful tips for upcoming writers and details of her publishing journey through a YouTube channel dedicated to helping demystify the sometimes complicated business of being an author.  Learn more at https://lisellesambury.ca/

Princess Ingrid of Norella Isle does not want to get married. Her priestess girlfriend, Lilura, devises a wicked plot to deter suitors with a nearly impossible marriage contract: should Ingrid die first, her husband must be buried at sea beside her.
The plan backfires when all seven suitors agree, and the king announces a competition for Ingrid’s hand. Ingrid must keep her head above water as she deals with the suitors, a jealous girlfriend, and the news of two murdered priestesses.
As the suitors are eliminated, one man stands out: the quirky and anxious Prince Soren who charms both Ingrid and Lilura. When Lilura goes missing, Ingrid and Soren must piece together who has murdered the priestesses and why before it’s too late.
CW: This novel contains violence, sexual situations, and adult language.

Lodestone
Lodestone-peddler Melaine is desperate to stop hustling her raw magic for a tuppence. Her rare gift of infusing her magic into a lodestone to sell for another's use and never keeping any for herself is nothing but a degrading path to an early grave.
Yearning for a better life, Melaine turns to her unconventional childhood idol, the powerful but sinister Overlord, sorcerer-ruler of the Centara. When she achieves an audience and arrives at his reclusive retreat of ancient Highstrong Keep, she finds that the compelling, handsome man who conquered a kingdom by the age of twenty is now a weak, shadowed husk, and he needs her lodestones to give him strength. In exchange, he will take her on as his apprentice.
Trapped in Highstrong with a half-crazed prisoner, a strict servant, and the Overlord, Melaine learns that they may all be prey to far more malevolent forces than the Overlord's black-magic experiments. Faced with menacing apparitions, ancient curses, and an even greater horror that could threaten the entire kingdom if unleashed, Melaine's penchant for survival is contested by her growing feelings for the Overlord and her path toward finding a deeper meaning to life than the pure power she once craved.

Blood Like Magic
A rich, dark urban fantasy debut following a teen witch who is given a horrifying task: sacrificing her first love to save her family’s magic. The problem is, she’s never been in love—she’ll have to find the perfect guy before she can kill him.
After years of waiting for her Calling—a trial every witch must pass in order to come into their powers—the one thing Voya Thomas didn’t expect was to fail. When Voya’s ancestor gives her an unprecedented second chance to complete her Calling, she agrees—and then is horrified when her task is to kill her first love. And this time, failure means every Thomas witch will be stripped of their magic.
Voya is determined to save her family’s magic no matter the cost. The problem is, Voya has never been in love, so for her to succeed, she’ll first have to find the perfect guy—and fast. Fortunately, a genetic matchmaking program has just hit the market. Her plan is to join the program, fall in love, and complete her task before the deadline. What she doesn’t count on is being paired with the infuriating Luc—how can she fall in love with a guy who seemingly wants nothing to do with her?

The Crown of Bones (Paperback)